It’s Day 3, 0600 hours, and we have another twenty hours before any reinforcements are due. Before we dive in, let’s look at the events on the real 12th of May. (As ever, my source for the historical context is the War Over Holland website, which is, as far as I know, not merely an excellent in-depth account of the battle for the Netherlands, but the only substantial English account of the battle for the Netherlands.)

Historically, about a thousand men held the Dordrecht-Zwijndrecht bridge (north-northwest of Dordrecht), comprising Gruppe de Boer, III Battalion/1st Fallschirmjäger Regiment, and a detachment from I Battalion/1st Fallschirmjäger Regiment. Only seven hundred men held the south approach to the Moerdijk bridges. (Our arrangement is roughly reversed. On the first day, historically, the Germans weren’t especially concerned with holding the bridge; they spent that time more thoroughly dismantling the Dutch defenses.) 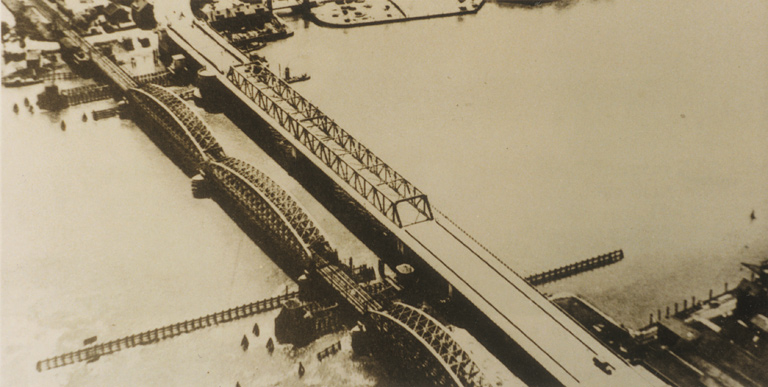 The bridges at Dordrecht, looking from north to south.

Student’s strategy was to focus on holding the bridges: he had no appreciable forces between Dordrecht and Moerdijk on the 12th. This makes a good deal of sense, given that Student had a little more flexibility than we do as regards the delivery of supplies. (Ours have to flow from supply entry points to a base unit, and from a base unit to the units to be supplied. Student could have his supplies dropped nearer his positions at Moerdijk, and rely on airlift to the Waalhaven airfield near Rotterdam to supply units north of the island of Dordrecht.) It worked well, particularly against the disorganized Dutch. Student’s forces, concentrated at two strongpoints, with screening forces easily able to fall back on the main force.

Also handy was the way that the French forces Maurice Gamelin had promised the Dutch never showed up. Unfortunately, we aren’t that lucky.

We’ll be following the strategy I labeled Student (winning with two votes), which is distinct from Student’s actual strategy. When reinforcements arrive, three battalions will beeline for Moerdijk, and one will head for Dordrecht.

0630
Remember the other day when 3rd Company/1st FJR was pushing into Dordrecht and ran into an enemy company? That company is now advancing on Gruppe de Boer’s headquarters at the Dordrecht bridge. The situation will need to be monitored carefully—with Gruppe de Boer’s line units a kilometer away, we may have to fall back.

At Moerdijk, there are several French companies in the Allied line now.

0715 -Time to run. We’ll set up a defensive line due east from the crossing point at Wieldrecht. Unfortunately, the HQ and the support units are taking a pounding from Allied artillery, and that’s making it hard for them to move. 0800 – II Battalion HQ/1st FJR was going to pop off to the east a bit to rest, but they’ll be needed in the line now. They’ll rest when they can. 1000 – This map shows all sightings of enemy units near Dordrecht, not just current ones (current being my usual setting). Even assuming that some of these are HQ units, this is more than Gruppe de Boer can reasonably be expected to handle. Hopefully they make it out. 1145 – Moerdijk is holding, but enemy units have been making their way around to the east, where they’ve begun to attack. At Dordrecht, Gruppe de Boer’s HQ and AT gun platoon escape, but the infantry gun battery is stuck at the bridge, and probably won’t make it out alive. (I suppose worse things have happened. I wasn’t able to keep it supplied anyway.)

1345 – Gruppe de Boer, minus its infantry gun battery, escapes, and is currently setting up a defensive line. The situation at Moerdijk remains the same, except that a pair of Dutch companies have appeared north of the north end of the rail bridge (the eastern of the pair). 5th Company/1st FJR has been sitting there for a while, resting up, so I send them to attack the Dutch before they can cause any supply line trouble.

1530 – The infantry gun battery, stripped of all of its guns, almost escaped, but was unable to avoid Dutch fire on its way out of Moerdijk to the south. That proved too much for the shattered morale of the troops, and the unit disintegrated.

1700 – The combined Dutch and French force at Moerdijk is causing me some pain, but as far as I can tell, the paras are inflicting much heavier casualties than they’re taking. I’m a little concerned that, as we get toward nightfall, the French may slip units across the road bridge. They’d run into 6th Company/1st FJR at the north end, but I don’t want to rely on a single company to hold back the tide.

7th and 8th Companies have been resting in the middle of the defense for some time, and, although they’re dramatically weakend after a few days of fighting, they’re at least not falling over asleep anymore. I send them to man the south end of the road bridge, to at least provide me with some warning. North of the Moerdijk bridges, 5th Company is cleaning up yet another two Dutch interlopers. I’m about ready to declare them the MVC.

1830 – Turns out I misunderstood the way the supply base personnel counter works. It isn’t badly understrength at all, just a long way above its load-carrying capacity. The men and vehicles arranged into supply columns are deducted from the overview personnel window. 2100 – Somehow, the paras beat back the French attack. The situation at Dordrecht is a little confusing: obviously, they have enough firepower to push me off of the bridge pretty easily, but they haven’t come after me east of Wieldrecht yet. I can see one unit up at the south end of Dordrecht, but nothing has come of it yet.

0000 – Nothing has come of it even now. I get the feeling that everyone’s resting up a little. Works for me. 0010 – Figures that the French would probe Moerdijk the moment I say that. The attack doesn’t last long, and we go back to a quiet front.

0200 – The first reinforcing battalion arrives. This is the Aufklarungs Battalion of the 9th Panzer Division—a reconnaissance force. This one consists of about 500 motorized infantry. I’ll send them to shore up Moerdijk. Two of the three battalions arriving at 0600 will clear out the enemy at Moerdijk. The remaining battalion will push on toward Dordrecht, link up with Gruppe de Boer, and retake the Dordrecht bridge.) 0230 – French forces occupying Wagenberg will present a bit of an obstacle to that plan. Our forces reorganize to attack.

This is a useful image, because it gives you a sense for the geography of the area: the 9th Panzer Division’s Aufklarungs Battalion, at the southeast, is just northeast of Wagenberg. Our reinforcements enter at Oudekerk, just east of the Aufklarungs Battalion. The red line south of Wagenberg that bends up toward Moerdijk is a highway, while the tan lines are roads of various descriptions. The black lines are railway lines, which are of little use to our reinforcements—they’re all mechanized forces, and it’s not much faster for a mechanized force to move over rail than to go cross-country. Wagenberg is important, because it controls access to the highway here. The other route, north from Wagenberg through Hooge Zwaluwe, is slower and longer. 0445 – The French at Wagenberg have artillery support somewhere—the Aufklarungs Battalion can’t get reorganized enough for an attack.

0600 – The remainder of this morning’s reinforcements arrive: II Battalion/11 Schützen Regiment (motorized infantry), I Battalion/33rd Panzer Regiment (54 tanks), and Gruppe Apell, which has swelled to about a thousand men. The motorized infantry and tanks will help clear out Wagenberg, while Gruppe Apell will bypass the enemy and hopefully cross at Moerdijk as soon as possible.

0700 – The situation in the south is highly complicated, so we’ll cover that first. The French occupy crossroads at Hooge Zwaluwe, Wagenberg, and the southeast edge of the map. The terrain between these is open enough, so we won’t be able to sneak Gruppe Apell past. Right now, Gruppe Apell’s staff has decided that its best shot to get past the French is to take a small road north, east of Hooge Zwaluwe, then bend around through Blauwe Sluis to get to the higway, and then on to Moerdijk. I’m not altogether sure this is going to work.

The other three reinforcing battalions are attacking Wagenberg, and seem likely to take it in the next two or three hours. (The French forces there are primarily a bombardment force, and won’t stand up well in direct combat.)

The French southeast of Moerdijk appear to be heading south to reinforce their three positions. Meanwhile, in the north, the situation is static. We have about two battalions worth of fight available to us, between Gruppe de Boer and paratroopers currently assigned to hold various important points (the supply entry point and the Wieldrecht bridge).

The following reinforcements will be arriving before the end of the scenario:

Here are the possible plans for the day.

Paulus – The presence of French forces south of Moerdijk notwithstanding, the German forces on the scene should be more than sufficient to break through to Moerdijk and points beyond. The reinforcements to follow can concern themselves with holding the road from Wagenberg to Moerdijk. The forces on the field now should be divided as agreed upon yesterday, unless the situation dictates otherwise.

Student – The presence of French forces throws a wrench into the works. The forces currently on the field should clear the road to Moerdijk, so that this afternoon’s reinforcements can sweep through Moerdijk and to Dordrecht unmolested. At Dordrecht, they will join Gruppe de Boer and sweep through the resistance at Dordrecht, before proceeding to Rotterdam.

von Rundstedt – We must not sacrifice the Moerdijk bridgehead. All of today’s reinforcements should be focused on eliminating the French and Dutch resistance south of the island of Dordrecht, minus a token force to push to the city of Dordrecht and contest its bridge.

Remember, I’m off next weekend, so we’ll pick up with the final installment in mid-January.